The chandeliers at Camden Spit & Larder were custom made for the restaurant.

We're introducing you to our Best Real Estate Projects of the Year. This is the top urban restaurant project.

The concept of developing a signature restaurant on the ground floor of 555 Capitol Mall, one of the largest private office buildings in the region, had been a priority for the building’s owners since construction started on nearby Golden 1 Center in 2014.

It was all part of a larger, ongoing plan to revitalize the prominent downtown address, built nearly five decades ago.

So when chef Oliver Ridgeway, known for his time at Grange Restaurant & Bar, suggested opening an English-inspired eatery based on his upbringing in Camden, a popular district within London, all parties were sold on the idea.

Still, while the developers loved the concept, there was still the question of “how do we take this old, tired office space and turn it into a significant piece of the development,” said Kipp Blewett, CFO and principal partner of Rubicon Partners, the developer-operator of Camden Spit & Larder.

The space, which Blewett referred to as a “cold-shell,” was previously occupied by commercial real estate brokerage CBRE and remained aesthetically uniform with the rest of the two 14-story towers, covered in cement and brown glass. 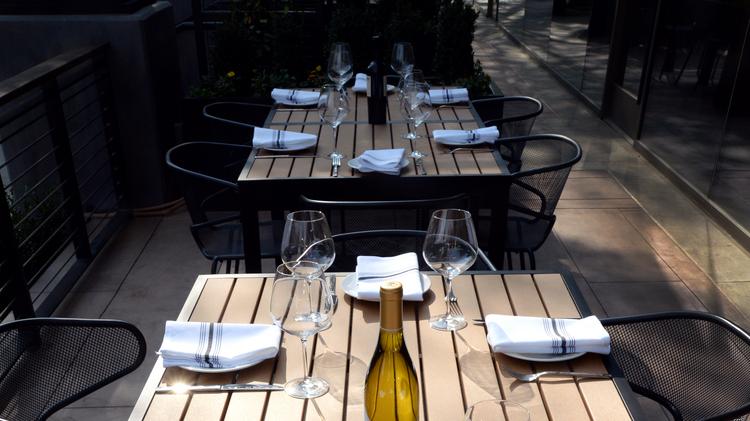 When the building’s owner, Pac West Office Equities LP, announced plans for renovations, which included an additional wing on the ground floor, office space vacancy had increased from 50% to 97%, said Blewett.

It was clear, he said, the tenants wanted a first floor dedicated to retail.

The addition of Ridgeway’s signature restaurant would transform the location from “one of the weaker assets on Capitol Mall to one of the strongest,” Blewett said.

Rubicon and Pac West brought in architect Brendan Koon, a principal at Vitae Architecture, who was already involved in revamping the building and had worked with Pac West in developing and designing The Citizen Hotel and Grange, where they had also met Ridgeway.

Once assembled, the team began to work on creating an atmosphere that embodied Ridgeway’s vision of a “tailored food experience” that would mix British comfort food and California flair, including fresh, local ingredients, said Koon.

Koon based his restaurant design on Ridgeway’s father’s time working in a British haberdashery, a store that sells sewing accessories, such as buttons and thread.

With fashion as a primary inspiration, Koon created a setting filled with patterns and textures used for clothing, such as houndstooth, pinstripes, plaid, decorative buttons and wingtips, and layered them to create a custom-designed appearance.

“I had a lot of fun,” he said. “It put me onto this path of mixing and matching different things that don’t necessarily normally go together.”

Each detail was thought out, from the ceiling sound baffles that look like floating coffered tin to the dark wood, steel and brass elements mixed with iconic fashion patterns in the bar at the front of the restaurant, to the patent leather seats that can be wiped down after spills.

The larder, a private dining or reception area, is separated from the main room by a one-way mirrored wall, so the main diners can’t see in.

“It’s been one of the more successful projects where we have truly blended and blurred the lines between architecture and interior design,” Koon said.

And to help instill a sense of fun and lightheartedness in the space, the restaurant is decorated with “family portraits” of animals dressed in formal wear.

Just as the interior was designed with detail and care, it was critical that the outdoor seating area create a welcoming feel and hopefully attract people on their way to Downtown Commons and the arena.

“Developing that patio was a challenge,” said Blewett. One complication was that while the restaurant was being built, the building’s owners were doing voluntary seismic upgrades, so the structure wouldn’t crack at the base during an earthquake. This meant putting in giant shock absorbers at the corners of each wing of the building and bolstering the existing columns and beams, Koon said.

Koon used this opportunity to create what architects refer to as a “soft story,” or an open space that blends the interior and exterior.

“Having to disrupt the first floor around the perimeter of the building created an opportunity for activating the streetscape,” he said.

From the second floor down, he replaced the brown glass with clear glass, separating the two colors with a canopy that also acts as a shade. He also converted much of the landscaping into patio space with wraparound seating, nearly doubling the restaurant’s capacity and creating an open feel.

On the Capitol Mall side of the restaurant, Ridgeway and Koon took a wall that covered the back of the house areas and created an 18-foot display window that shows off a custom-made statue of a large boar dressed in a three-piece pinstripe suit and riding a houndstooth-patterned Vespa. “Winston,” as he’s been dubbed, serves as both the mascot of the restaurant and an ideal Instagram moment.

“It’s Camden’s bad boy,” Koon said. “This can embody everything we’re going for.”